James Hoff returns to PAN with a new audio/visual project titled HOBO UFO (v. Chernobyl), which utilizes a modified version of Google’s Street View to explore Chernobyl and its surrounding environs. The artist (with the aid of coder Reuben Son) has hot-wired Street View so that it is audio reactive, creating a first-person viewing experience completely dictated by music Hoff has created. Originally commissioned by Unsound Festival, Hoff began working on this version of HOBO UFO in 2017, creating over an hour of music that had the hallmarks of his work on BLASTER: noisy, intense, and chaotic. After spending dozens of hours on Street View while composing, Hoff decided to visit the zone of exclusion in 2018 and his experience there prompted him to scrap all the existing material and start fresh with a less conceptual approach that could respond more emotionally to the zone and his experience there. In particular, he focused on Pripyat, which prior to the meltdown, was a grand city and a “triumph of Soviet urban planning.” Hoff sought to reflect this moment as well as that of the valor of the people affected by the accident and the tens of thousands of workers who fought to contain it. The resulting 14-minute work employs woodwinds, brass, double bass, and synthesized GPS signals, which Hoff recorded on site—reflecting a turn away from his earlier conceptualized and deconstructed sound towards composition that is neo-classical and ambient in nature. In it, we hear a melody that is both uplifting and melancholic, punctured by lurking static and Geiger-counter like pulses. All of this drives a visual component that takes the viewer through the empty streets of Pripyat and into its municipal buildings, schools, theaters, and athletic facilities; into the Cherynobyl nuclear facility and its control room; and eventually to the Duga Radar system and the landscape that surrounds it. The narrative unfolds with the music, creating an experience that is unsettling in its unraveling, yet captivating in its particular form of digital voyeurism. What we see is not a city frozen in time, as many have claimed, but rather an ongoing disaster site of social architecture over-run by nature, helped along no doubt by capitalism following the collapse of the Soviet Union. Using the UFO as a metaphorical vehicle for traversing Google’s Street View, Hoff transforms the quotidian experience of navigating this platform into a cinematic one. By placing the UFO in the zone of exclusion, he provides an alternate take to the stylized, over-ideologized version of Chernobyl that one sees in contemporary culture. In particular, he locates it as a site of ambient, or creeping, capitalism fueled by Cold War nostalgia and advances in corporate media/surveillance technology—in June, Cherynobyl was labeled an official Tourist Attraction by the Ukrainian government, with President Volodomyr Zelensky proclaiming that it should no longer be considered a “negative part of Ukraine’s brand.” Hoff debuted HOBO UFO in London in 2016 and has since performed with it several times as a site-specific audio-visual work. The program runs in real-time as a backdrop to Hoff’s performance, beginning at the venue where the show is held. The music that drives it is constructed from de-pitched GPS signals and the experience gives the audience a glitchy, confused vision of their city; a journey, if you will, demarcated by rapidly changing weather patterns, time, and geography. The live experience both subverts the AV component that most expect from an electronic music performance, as well as the corporate and commercial aspects of the Street View platform, which aside from navigation, people use to sell real estate, play video games, and promote their businesses. 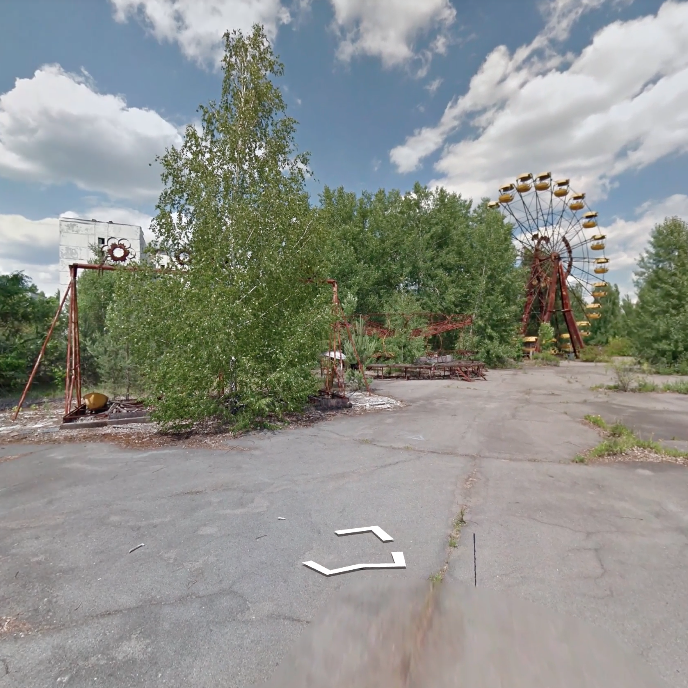